skip to main | skip to sidebar

This year my mom and dad (Cathy and Alan) were lucky enough to draw antelope tags for Easter Oregon ... I was not :(

The trip started out with mom, dad and Quigley driving up the Wednesday before the season starting on that following Saturday (8/15/09). My family (Cindy, Grace, Natalie, Ryann, Colby and myself) drove up the Friday before. I was up there for a supporting role as a guide for mom and dad; helping them glass, pack, drive truck in support to getting them each an buck antelope.

We where able to go out glassing that Friday night to see where the antelope would be bedding down for the night, as usual the next morning they were no where to be seen. So we got a good walk in for the morning hunt on Saturday.


*Picture to come*
Posted by Bill Ashforth at 6:07 PM No comments:

Time off for some fishing

Today we took the afternoon off and several of us (Grandpa Ashforth, Natalie and myself)headed to the high Cascade Lake and did some shore fishing at South Twin.

*Pictures to come*
Posted by Bill Ashforth at 5:56 PM No comments:

Its been awhile since I have last updated the blog but the family has been keeping busy either working at work or working around the house on multiple projects:

Project #1: Build a new fence on the West side of the house: 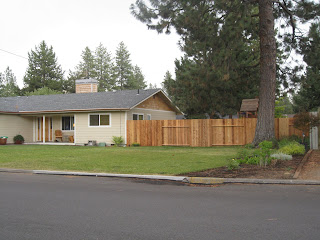 Project #2: Move over the kids play fort/swing set from the other side of the yard (where the new lawn is now) and build a pea-gravel base: 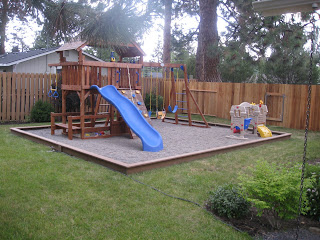 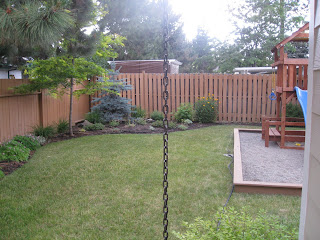 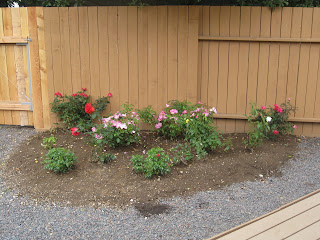 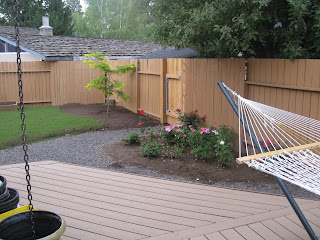 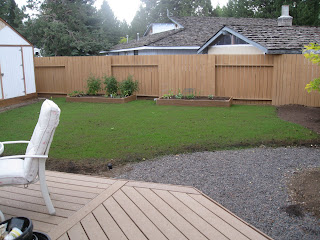 Project #5: Build a new fence on the East side of the house: 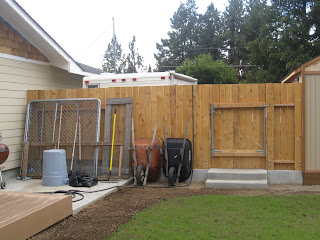 Project #6: Create a new baseboard and corner/roof molding for the old shed (Still Under Construction): 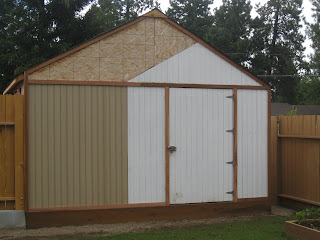 Please Note: All the people that lend a helping hand: Bill, Cindy, Natalie, Ryann and Grandma Cathy (thanks mom for the helping hand when Cindy had her hands full with the kids ...and all the gardening advise was a true bonus).
Posted by Bill Ashforth at 4:34 PM 1 comment:

Yepper it is true, my wife is old :) ....Grace our oldest daughter just turned thirteen today, that is right we have a teenager living amongst us now ......
This year we had a full house for Grace's birthday, the following people were able to attend this year: Cindy's sisters (Misty and Dawn), Cindy's mom and significant other (Linda and Bernd), my parents (Alan and Cathy) and the immediate family (Grace, Natalie, Ryann, Cindy and myself).
Group Picture 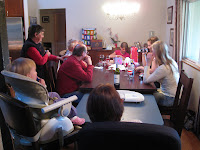 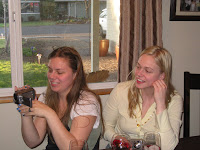 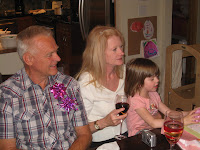 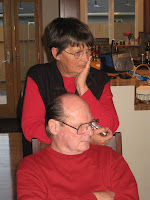 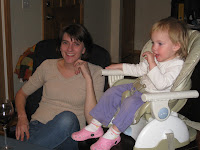 Posted by Bill Ashforth at 8:38 PM No comments:

Since Verizon bought out Unicell the family (Cindy, Natalie, Ryann and myself) decided to go camping at our old deer and elk hunting area off the Middle Fork of the John Day to see if we still had cell phone coverage …well that was the original intent ……

The first sign of trouble occurred when I was filling the old camp trailer with water and found out that I did not get all the water out of the system before it froze during this last winter …that’s right BROKEN WATER PIPES ……luckily I only had to fix a 3 foot section of the water pipe in the bathroom.

Truck and trailer ready for the road trip 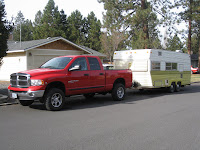 The ride over was uneventful will hardly any wildlife along the river.

The second sign of trouble happened when we pulled up to where the family normally camps (the upper camp site) and half the site was under water so I found a new location on the upper end of the camp site where it appeared dry and solid ground (remember APPEARS). 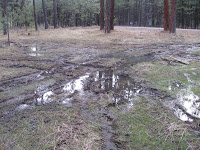 Since we got there in the afternoon on Saturday and the weather was in the upper 70F, we decided to go check the several locations that we use to get cell phone signals, well halfway to the first location on the main road between the upper camp site and the Deadwood camp site the road was still blocked with 8”-10” of snow pack from the winter. Since we were the only ones in the area I decided to walk the 1/8 mile to check cell coverage ….and we had 1 good bar. 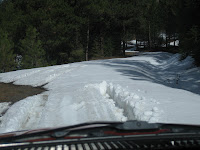 Next we tried to go out to the point to see if we got coverage and again the road was blocked by 8”-10” of snow, so I decided to go back in the morning and walk the ½ mile to where we setup to scope and to call out.

Back in camp the family got some time around the camp fire and then we went to bed early. The next morning I got up and set out to hike the ½ mile to the point and was treated as I parked the vehicle to see several elk about 200 yards away (love watching elk in the wild).


Family time around the camp fire 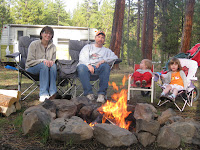 After the hike to the point I found that I was able to get 2 bars (Yes) ……several pictures later I walked back to the truck and returned to camp to get things packed up to head home.

After packing up the back of the truck I looked to see about hooking up the trailer, remember the statement above about APPREARS dry and solid, WELL after the extremely warm weather of up 70’s the day before and now low 80’s the snow behind the trailer had melted and deposited a nice pool of water at the front of the trailer.

Yepper you are going to guess it …. Long story short, I got the truck stuck (right in front of the trailer) trying to pull out the trailer …..As I was in the middle of digging out the truck, two trucks came down the road and I flagged them over to help pull the truck out. As luck would have it they were DUCK fans (to go on record ...........the BEAVERS ROCK). 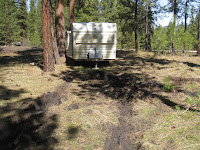 With my dad, his truck, and me and my truck we headed back the next day (Monday) and were able to pull the trailer backwards 30’ to a solid spot to get the trailer out. 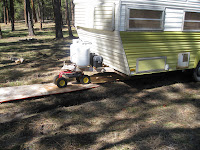 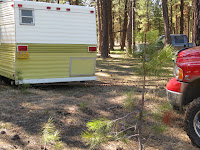 What was supposed to be a leisurely camping trip of round trip driving of 400 miles and one night of camping turned into an 800 mile road trip over three days.

The priceless part of the full experience was my middle daughter (Natalie) using her toy cell phone to call Uncle Dave (a college friend of mine) to come get the trailer out for daddy.
Posted by Bill Ashforth at 8:37 PM No comments:

Well the Easter bunny visited our house this year and the girls were able to hunt for Easter eggs inside and outside :) 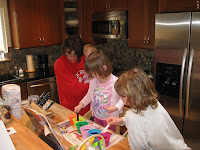 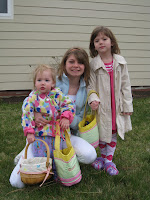 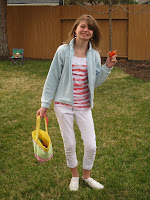 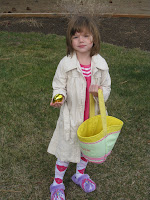 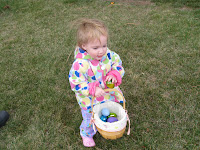 Posted by Bill Ashforth at 8:37 PM No comments:

Today (4/5/09) was actually a good sunny day (61 Degrees) to work out in the yard, I was able to pick up all the pine needles ....... it took all day but was able to get it all done :) This will hopefully set us up so we will be able to go camping more this summer.
The front yard all picked up and ready for some fertilizer on the lawn. 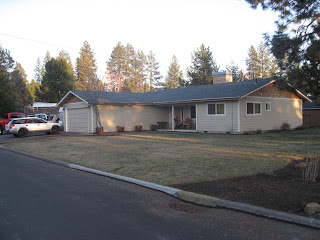 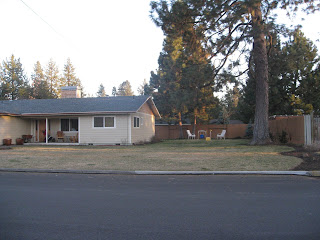 Was able to get a full truck load of pine needles. 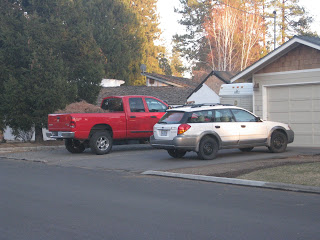 After the work was all done then it was time to get out the BBQ and cook up some steak and potatoes ....mmmmmm. I was glad that my mom and dad was able to join in on the steak.

After dinner Natalie talked me into getting a fire going in our outdoor fire pit and we had some delicious roated marshmellows over the open fire.
From Left to Right: Natalie, Dad, Mom, Cindy and baby Ryann roasting some marshmellows 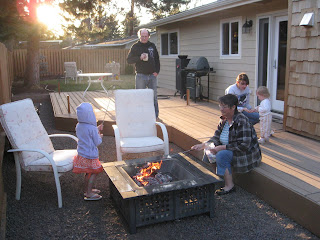 From Left to Right: Me, Natalie, Dad and baby Ryann roasting some marshmellows 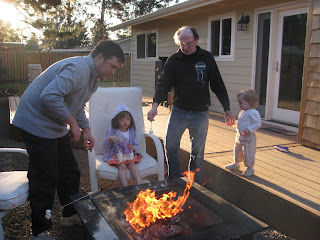